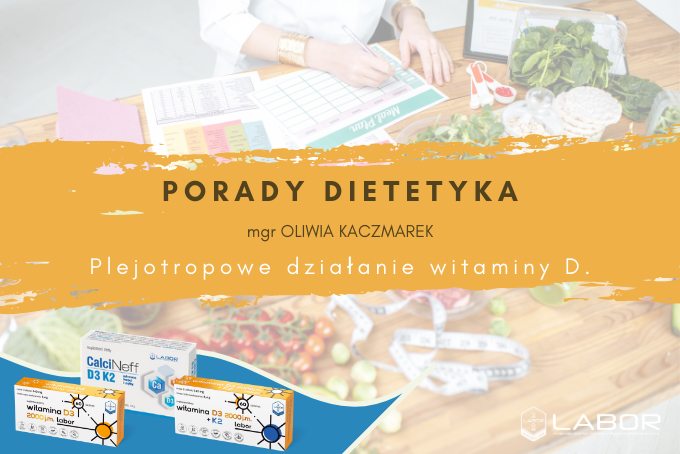 Vitamin D is a group of fat-soluble compounds. Its most important naturally occurring forms are ergocalciferol, known as vitamin D2, and cholecalciferol, known as vitamin D3. Both forms of vitamin D are metabolized in a similar way in the body and lead to the actively produced biological form of vitamin D, i.e. calcitriol. The active form of the vitamin is transported to various organs and adipose tissue, where it is deposited and stored.

The role of vitamin D
Vitamin D has a multidirectional effect in the human body. Most often it is associated with the regulation of calcium and phosphate metabolism, which affects the development and mineralization of bone tissue. In the case of an insufficient amount of vitamin D in the body, calcium is not completely absorbed from food, which has a significant impact on the skeletal system. Vitamin D deficiency in children can lead to rickets, which is manifested by bone deformities, reduced bone mass, and disturbed mineralization. However, in adults, especially in pregnant and lactating women, as well as in the elderly, it causes osteomalacia (bone decalcification and softening) and osteoporosis, i.e. a decrease in bone mineral density, disturbances in its structure and greater fragility. This in turn is associated with an increased risk of fractures. Potential benefits in the prevention of osteoporosis may result from supplementation with preparations containing calcium, vitamins D3 and K2, e.g. Calcineff D3 K2.

There have been many studies confirming the link between vitamin D deficiency and autoimmune diseases, i.e. those in which the immune system attacks its own cells and tissues. These ailments include, for example, multiple sclerosis (MS), psoriasis, Hashimoto’s disease or type 1 diabetes. Adequate supply of vitamin D improves the sensitivity of tissues to insulin and reduces the risk of developing multiple sclerosis. In the case of people with MS, symptoms alleviated during the course of the disease. Vitamin D is also important in maintaining the proper condition of the skin. Has an impact, among others; for the synthesis of filaggrin, i.e. a protein necessary for the proper structure of the epidermis. In the context of cardiovascular diseases, vitamin D normalizes the contractility of the heart, while its low concentration may contribute to the occurrence of cardiovascular diseases.

Another role attributed to vitamin D is to strengthen the functioning of the immune system. It stimulates the body’s immune cells to produce antibodies, thus protecting the body against inflammatory processes, reducing the risk of infection and disease. Research has also found a relationship between thyroid disease and vitamin D deficiency. It has been observed that vitamin D deficiency promotes thyroid inflammation, and the greater the deficiency of this vitamin, the higher the value of TSH (thyroid stimulating hormone).

Vitamin D sources
There are two sources of vitamin D. The first is its production in the skin, and the second is food. The most efficient process of vitamin D3 formation is skin synthesis as a result of the action of UVB solar radiation. This process depends on many factors, such as: the degree of sun exposure, time of day and season of the year, exposed part of the body, skin tone, body weight, amount of body fat, as well as latitude and the degree of air pollution.

Animal products are rich in cholecalciferol (D3), such as fatty sea fish (eel, mackerel, herring, salmon, sardines, tuna), fish oils (fish oil), egg yolk, liver, butter, cheese, margarines fortified in vitamin D. A less efficient form is ergocalciferol (D2), which is found in plant products, yeast and mushrooms (porcini mushrooms, mushrooms, Shiitake mushrooms). Vitamin D is absorbed from food products in the small intestine in the presence of fatty acids. It is worth noting that the diet provides only 10-20% of the daily requirement for this vitamin, therefore supplementation is recommended. 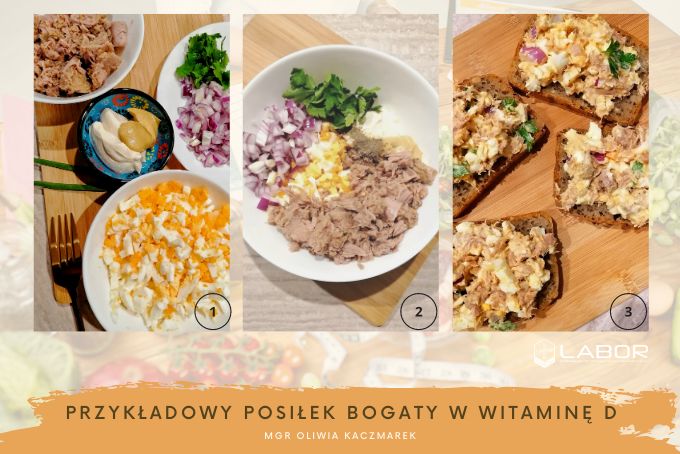