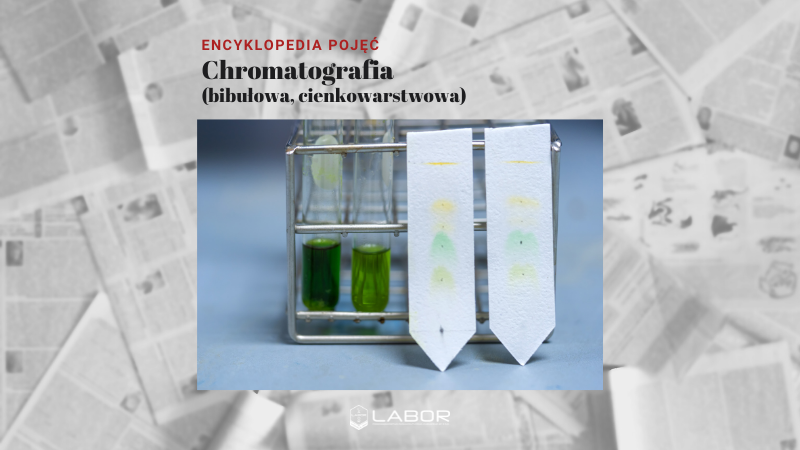 Chromatography is an analytical technique used to separate mixtures of chemicals into individual components (for analytical or preparative purposes). The introduction of the chromatographic technique was a revolutionary advance in the chemical analysis, allowing for a quick, simple and cheap separation of a mixture of chemical compounds into individual components. How enormous this progress was evidenced by the fact that many times the Nobel Prize was awarded for work related to the discoveries of chromatographic methods (A. Tiselus in 1948 and A.J.P. Martin and R.L.M Synge, 1952).

Separation into individual compounds that are components of the mixture takes place through the flow of the mobile phase (eluent) through the stationary phase.

Paper chromatography – the stationary phase is paper suspended in a large chamber at the bottom of which there is an eluent. The lower edge of the blotting paper is suspended in the  chamber. A small amount of the analysed mixture (usually 0.05 – 0.1 ml) is applied with a special pipette on the starting line located just above the point where the eluent will reach. Then the paper is suspended in the chamber where the process of developing the chromatogram takes place. You can clearly see the eluent front moving up the blotting paper. After reaching the appropriate level, we start reading. Individual components are visible in the form of round spots (if they are stretched or the division did not take place, it means that the eluent was wrongly selected), revealed under ultraviolet (UV) light or after spraying with an appropriate developing reagent (very often it was an iodine solution). The individual compounds in the mixture are described by their Rf (retardation factor). It is the ratio of the height at which the spot of a given compound is located to the distance between the starting line and the front of the chromatogram. A low Rf means the spot is close to the starting line, and a high Rf is close to the forehead.

It was quite a cumbersome method, it required the use of large chambers (even 1 meter high) and the handling of large sheets of blotting paper was not easy. To simplify and facilitate this, a method called

Thin layer chromatography – the principles remain the same, only the blotting paper has been replaced with a thin layer of silicone gel (or cellulose) applied to a glass plate (usually of standard size 10 x 20 cm).

First, such plates were poured and prepared by oneself, but very soon plates ready for immediate use and chromatographic chambers adapted to their size became available for sale.

The next step in the development of chromatography was the introduction of instrumental methods, but more on that in the next post.